Azkoyen Group recorded a net profit of 15.6 million euros in 2018, a 22% increase on the previous year

Grupo Azkoyen | Azkoyen Group recorded a net profit of 15.6 million euros in 2018, a 22% increase on the previous year

Azkoyen Group, a Spanish multinational company with head offices in Navarre, has obtained a net profit of 15.6 million euros at the close of 2018, which represents a 22% increase in profit in comparison to the previous year.

The net turnover of the Azkoyen Group has also increased with regards to the previous financial period by 3.2% (3.3% at constant exchange rates) until reaching 139 million euros, thus continuing with the upward trend that began in 2013, and with a significantly higher increase than in the previous financial period (0.4%). It is worth noting that part of this growth is due to the good behaviour of the Vending Systems division, which recorded a 4.7% increase in sales during the past year, as well as the Time & Security division, recording a 3.6% increase over the last 12 months.

On the other hand, noting the 3.2% increase in EBITDA, which by the end of 2018 stood at 22.2 million euros. The EBITDA, excluding the activation of development projects, increased by 5.2% in comparison to the previous year. Likewise, the percentage of the Group’s EBITDA/sales stands at 15.9%, similar to the figure recorded for 2017.

For its part, the EBIT increased to nearly 18 million euros, 6.5% more than the 16.9 million recorded for the previous financial period.

Considering the previous aspects, the consolidated after-tax result for 2018 amounts to 15.6 million euros. As can be seen in the following graph, which reflects the evolution of the Azkoyen Group’s net result since 1990, updating all historical values to euros at December 2018, the result obtained for the 2018 financial period is the second best since 1990, only behind the figure recorded for 2001, when the company had an important “one-off” originating in the mass sales of coin selectors due to the entry into effect of the euro. 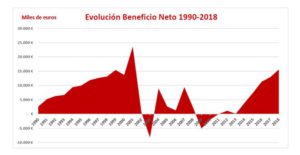 Proposal for distribution of dividends

The Board of Directors will propose to the General Shareholders’ Meeting to allocate 30% of the consolidated result to dividends, that is, 4.7 million euros.

Evolution of the sales by divisions

The volume of income from sales pertaining to the Vending Systems division has experienced an increase in sales of 4.7% during 2018, when compared to the previous financial period, recording 44.5 million euros

This mainly includes professional coffee vending machines for the Vending industry and the Horeca sector and, to a lesser extent, vending machines for cold drinks and snacks. During 2018, this part of the division recorded a 7.4% increase in sales in comparison to the previous year. In this area, the Azkoyen Group has focused its plans on the coffee business, a sector that is currently experiencing growth.

The Azkoyen Group continues to dedicate significant resources to innovation, in the aim of strengthening the differential values of its design, on the one hand, as well as to improve the user experience and apply new connectivity technologies. And, secondly, aiming to achieve excellence in coffee solutions, while ensuring growth in traditional markets, generating recurrent income and developing new product niches for large accounts. And, last of all, aiming to strengthen its expansion in the American continent.

In October 2018, the Azkoyen Group, via its Coffetek brand, received an award at the “Vending Industry Awards”, the British vending industry, namely the “Best Innovation in machines” award for Novara Protein, an ideal model for gyms and sports centres. This acknowledgement is added to the other two received in September, for its Vitro series, from the British vending association, AVS, as “Best manufacturer” and “Best table top vending machine”.

Likewise, the Azkoyen Group was present at the Venditalia trade fair in Milan (6 to 9 June 2018) with its Vitro series, which has been warmly welcomed in Europe and especially so in the United Kingdom. The Group was also present at the European Vending Experience 2018 (EVEX 2018) event, held on 15 and 16 November 2018, with its Vitro X4 DUO and Zensia Double Espresso models.

On the American continent, the Azkoyen Group attended the Cafés de Colombia Expo 2018 trade fair, held in Bogota (3 to 6 October 2018), to present several technological innovations for its coffee machines, designed to optimise their performance under high humidity conditions, as occurs in tropical regions. Prior to this, in June, the Group formalised an agreement for supplying Vitale S model coffee machines with Vendomática, a Chilean vending machine operator, for them to be installed at the branches of the Banco de Crédito e Inversiones de Chile. More recently, it is worth noting the choice of this same model, Vitale S, by the Subway fast-food restaurant chain, which for the first time will be offering coffee at its restaurants in Colombia.

In addition, noting that Azkoyen USA Inc. took part for the third consecutive year in “The NAMA Show” trade fair in Las Vegas, held from 21 to 23 March 2018. Likewise, with regards to said American market, the Group has obtained UL certification for the Vitro S5 and Vitale espresso coffee machines, which will help to market these models.

On the other hand, the volume of income from sales of the tobacco vending machines, which represents around 20% of the income of the Vending Systems division, has experienced a 4.6% drop in comparison to last year.

This division has experienced a 1.0% increase in sales during 2018, generating a turnover of 41 million euros.

In the retail segment, after major efforts in previous years with regards to R&D, the Group’s resources are still focused on its Cashlogy automatic payment system, which allows to reduce collection periods by half, reinforcing security in transactions due to detecting fraudulent uses and avoiding discrepancies in the till and minor thefts.

Regarding the above, highlighting the presentation of the two models within the Cashlogy series, the “POS 1500” and the advanced model “POS 1500X” at the IBA 2018 trade fair held in Germany between 15 and 20 September 2018. IBA is the worldwide leading trade fair in bakery and patisserie. The Cashlogy “POS 1500X” was also presented in early 2019 at the “SIRHA” trade fair in Lyon, held from 26 to 30 January 2019. This is one of the most important events in the catering and hotel sectors, in both France and the world.

In the area of Payment systems for vending machines, Coges experienced a 3.5% drop in sales in comparison to 2017; when, on the other hand, these increased by 7.5% in comparison to 2016 (partly due to the positive effects of the entry into force of the new tax legislation in Italy). Around 68% of the sales of products within the Payment systems for vending machines business unit, Coges, which is the European leader for closed environment cashless systems, are carried out in said Italian market.

Furthermore, in relation to the foregoing, it is worth bearing in mind that Coges Mobile Solutions, SRL (of which Coges owns a 51% holding), markets by means of licenses an innovative technology that allows, among other aspects, for paying at vending machines through an app for smartphones called Pay4Vend, which uses the Bluetooth connection to link up to the Coges hardware installed on the machines.

The latest version of Pay4vend was presented at the Venditalia trade fair in Milan (6 and 9 June 2018), and now comes with a new graphic interface to make it faster and more user friendly. More recently, in November, Coges took advantage of the Vendex North 2018 trade fair, held in Manchester, to present its new Joyco app for smartphones. This app allows users to pay directly through their mobile phone and also allows for customising drinks in the Azkoyen and Coffetek vending machines that have been fitted with Coges hardware. In parallel, Coges also presented its note reader, for the vending sector, Creos, which provides high standards of reliability and security.

Moreover, 2018 saw the launch of other innovative projects related to the development of “Machine to Machine” (M2M) platforms and the Internet of Things (IOT) applications, which will contribute added value to the Coges hardware, in addition to generating recurrent income. In this context, at the previously mentioned Venditalia trade fair in Milan, Coges presented its new star product: Nebular, an innovative connectivity solution that combines the intelligence of cashless with cloud computing, enabling to transmit data from the Coges payment systems, which are installed in the vending machines, to certified servers, to then gain remote access to the machines.

In the Time & Security division, the Group has continued to reap success regarding the sales strategy has been implementing over the past years with a focus on more profitable projects, on its own solutions and with lesser integration of products and subcontracting with third parties.

The total turnover of the Time & Security division for 2018 stands at 53.8 million euros. This represents a 3.6% increase regarding last year, highlighting the increases seen in Germany and France, and on the other hand, a slight decrease in Belgium and Spain. Likewise, highlighting that the income from maintenance represents around 27% of the business turnover. At 31 December 2018, the order book, including projects and maintenance contracts, showed 35.1 million euros, 5.9% more than in the previous year

In 2017, the Azkoyen Group became the sole shareholder of Primion Technology AG, which is leading to a more in-depth control and the generation of synergies. In turn, the necessary procedures were carried out for transforming Primion Technology AG into a GmbH company, coinciding with the appointment of a new General Manager for this segment. Subsequent to its registration, the aforementioned transformation became effective on 17 July 2018.

The Primion subgroup focuses on two markets: Access control (infrastructures and electronic systems that grant a user access to an installation according to the credentials presented) and Time and presence (software for management and analysis of the hours worked by employees along with other related features).

Regarding the software, significant efforts have been dedicated to redesigning the graphic user interface or “GUI” to respond to the current user needs by means of an intuitive, clear and concise structure. This new graphic interface, as well as the new and interesting functions of the rest of the Time & Security hardware and software, were presented at Europe’s most important event in the field of security systems, cyber security and fire protection, the Security Essen trade fair in Germany, held from 25 to 28 September 2018.

With collaboration from a reference external consultancy firm, the Azkoyen Group’s new “2019-2021” strategic plan has been drafted. This strategic plan was approved by the company’s Board of Directors yesterday, 27 February 2019. It establishes the goals for accelerated organic growth, along with the initiatives aimed at providing resources and supporting business development.

For 2019, the company expects an increase in income from sales in excess of the 3.2% recorded in 2018 and an EBITDA in absolute terms (“before the effects of IFRS 16” – Leases, which enters into force as of 1 January 2019) basically similar to that of 2018, with increases in fixed expenses, mainly commercial and related to R&D, in accordance with the approved strategic plan.

The company will increase investment by the different businesses in intangible assets (development projects in the Primion subgroup and IT applications) and tangible assets, with an aggregate budget for 2019 of 7.3 million euros (3 million euros in real figure for the 2018 financial period), representing a 143% increase on 2018.

The benefits of the plan will be progressive, expecting to obtain the highest increases in sales and results by 2021.